While I spend a good deal of my time lambasting the right wing, I’m going to take a little time off to point out that we have our own share of unaccountable stupidity on the left.

I offer you this:

Now, personally, I’d LOVE Bernie Sanders to win the nomination. I doubt he will, but I’d love it. But should he fail to get the nomination, I’d feel at least secure in knowing that Hilary Clinton is not going to start WWIII, or put anyone in camps, or torture the relatives of ISIS members. Something I can’t honestly be sure of when it comes to Trump – who is not only incompetent but a sociopath. Meanwhile, we have the woman who romanticized driving off a cliff only thinly veiling her hunger to ‘bring on the revolution.’

I’m watching this, sitting in Phnom Penh, Cambodia.  Where they did actually have a revolution which resulted in the deaths of between 1.5 and 3 million civilians. And, you can imagine, the initial dreamers of revolution did not envision genocide. That’s the thing about the ‘bring on the revolution’ delusion. People always assume they know which way revolutions are going to go.

But that’s the one sure thing about revolutions – they NEVER go the way you want. The idealists, the Bernies of the world get pushed aside by people  who are far more charismatic, brutal and have zero qualms about how many people have to die on the way to their imagined utopian year zero.

I grew up in Spain, in the dark years that followed Franco’s ‘revolutionary’ victory over the democratically elected Republican government in disarray (because that’s the other thing – you don’t always win the revolutions you start). I’ve lived 17 years in Vietnam. A place that, whatever significance the US might place on it, fought a war of independence and revolution that went on for almost 20 years and cost millions of lives – the vast majority of them NOT American and NOT military.

This morning, I’m sitting in a cafe in Phnom Penh, less that a kilometer away from Tuol Sleng – the famous prison where the Khmer Rouge revolutionaries carried out their political cleansing of the Cambodian population. 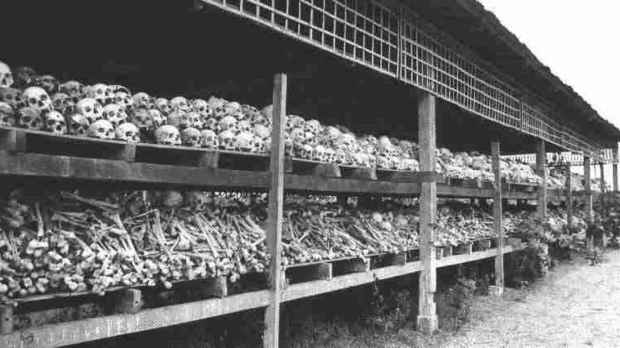 Ms. Sarandon, this is what revolution looks like, you disconnected, over-privileged,  historically oblivious moron.

I’m pretty sure that Bernie Sanders is saner, less selfish, and more historically informed than this idiot woman. He needs to thank her for her service and then firmly send her back to her Hollywood fantasyland. Anyone who prefers a ‘revolution’ to Hillary Clinton either knows nothing about revolutions or simply lacks any vestige of morality.

← Trump: Questions and Incredulity are the Sand We Stick Our Heads In.
Brexit or Remain: The Deceptive Lure of Choice →

One thought on “I’m Ready for my Revolution, Mr. DeMille”